Who is Albert Woo?
documentary 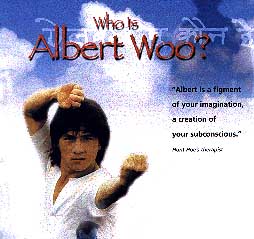 In search of the ultimate Asian Male role model in the West...

What comes to mind when you think of an Asian man? It may be the strong and tenacious martial arts movie star, Jackie Chan. Or perhaps a stoic intellectual like the Beatle's Maharishi. But what about a passionate, artistic, ultra-hip, funny... yo-yo champion?

Who is Albert Woo?

"The 52 minute masterpiece challenges every concept about Asian man. And unlike any other film, this one mirrors Bermuda's own quest for national identity."
Jarion Richardson, Bermuda's Royal Gazette

"Hoe has the touch of an experienced journalist who is able to draw from his interviewees' honest and sincere revelations. His conversations with Jackie Chan are perhaps the most revealing, in part because Chan is quite familiar to North American audiences, yet still seems so far away... Combining a standard interview approach with some original storytelling techniques, the film successfully explores the issues at hand while offering substantial food for thought..."
Matt Pearson, The Gazette, Montréal

"WHO IS ALBERT WOO? smashes Asian stereotypes in nearly every imaginable walk of life... It is an eye-opening experience for audiences of all ethnicities..."
Minneapolis St-Paul Int'l Film Festival

"Through interviews with a variety of Asian men and women, including Jackie Chan, Hoe makes some refreshing points that many have rarely considered."
Westerner, B.C.

" It had lots of personality and was fun to watch... I think this is Hunt's best film yet..."
Lois Siegel, University of Ottawa

National Film Board of Canada

Who is Albert Woo?
Photographs from the
Montreal Asian Heritage Festival Fundraiser
Held Oct.22, 2001
at the Cinema Imperial, Montreal