Please CONTACT us for Canadian Acquisition
1st BITE on CTV network from January 1, 2010
Check out www.vivaconfusion.com

"We kill we eat what we love!"

A sumptuous fable, a Fant'asia' tale of love & destiny.

In love and in life, it's cooking up the passion that counts.
The greatest passion is rewarded with the greatest death. 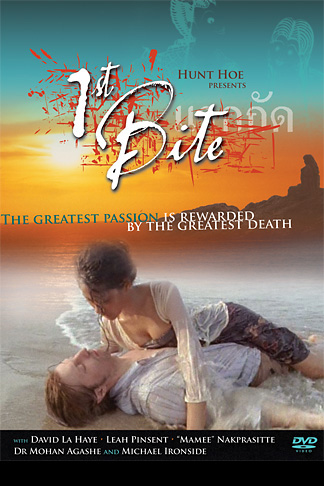 Set on a tropical island in Thailand, the film explores the strange plight of a beleaguered chef who, while romancing a mysterious woman, discovers the diabolical Zen of cooking.

Following a near death escape, he returns to Montreal and falls hard for the woman of his life who unfortunately craves only his cooking but not his loving.

Worse still, strange things surfacing around him indicate that his journey to the Far East has deep, divine implications. The stage is set for him to take the 1st Bite of true love and end the cycle of suffering for all involved.

Director's Comment: "While storytelling in the West weighs heavily on logic and a clear-cut cause and effect in narrative development, many popular South East Asian tales are based on fables, borrowing on classic themes and mythology, such as the philosophy of animism - a belief that objects such as rock and water have souls. Growing up in Malaysia, I was sensitized to such things as spirit, occult and the powerful force of nature." (Hunt Hoe)

"The spellbinding film is a romantic but chilling fable...The acting is impressive, the camera work compelling and story line is strangely enchanting... Unique and progressive, director Hunt Hoe manages to blend "1st Bite" into a mesmerizing rollercoaster ride of legend, depravity, mystique and fantasy."
"Dr Mohan Agashe, an Indian actor who showed us the spiritual side of "1st Bite", and leading man David LaHaye's floundering cook, were phenomenal. But "Mamee" Nakprassite's performance was unparalleled."
Jennifer Guay, The Plant, Montreal

"A fun ride. The film is gorgeous, well directed and acted. There is an air of contemplation and exoticism that is very appealing."
FILM FINDERS

"The film was well-acted... 'Mamee' Nakprasitte is hauntingly effective... Michael Ironside rounds out the stunning cast... Hoe is anything but conservative in terms of the issues he touches upon, most importantly the exoticization of Asian women in Thailand by Canadians and Aussies, and more namely the business that has spawned off of the exploitation of the stereotype of submission, white women and bulimia, cultural appropriation, eastern philosophy and enlightenment, vampires, and the relative fragrance of durian."
RicePaper, Vancouver

"Consistently compelling visuals make this a rivetting cinematic rollercoaster ride into the world of food, love and spiritual mysteries.
David LaHaye gives a powerful performance and Leah Pinsent find the perfect balance between beauty and repulsiveness in her character..."
Vancouver International Film Festival

LOVE AND FOOD; Cooking at Home for Loved Ones

Cooking With Love - filling your home with great smells

House Cleaning for the Family - love of family, house cleaning made important

SNAPSHOT
"Behind the Scene" Photos

EXCERPTS of MUSIC FROM SOUNDTRACK