One Night in Bangkok... 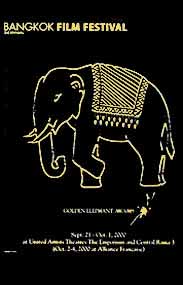 EVERYTHING was in place for the debut showing of the internationally acclaimed Canadian film "Seducing Maarya" at the Bangkok Film Festival on Sunday night. Everything, that is, except the movie.

To the disappointment of the capacity audience and embarrassment of festival organisers, a German movie flicked onto the screen when the projector began rolling.

Adding to the mystery and confusion for the audience was the fact that the director and cast of "Seducing Maarya" were on hand at the Emporium for its debut screening. Director Hunt Hoe and Indian star Nandana Sen had even addressed the full house of movie buffs, including many from the Thai entertainment and media industry, about the making of the movie before the screening.

To their dismay, festival organisers discovered that the box in which the film was shipped from the Philadelphia Film Festival to Bangkok had the name of the right movie stamped on the outside.

Festival director Brian Bennett had to explain to the disappointed audience that "Seducing Maarya" could not be shown because of the shipment glitch.

But what price for watching the wrong film? For Canadian businessman James Gulkin, who was in the audience on Sunday night, watching the right film means spending at least US$3,000 (Bt127,000). He has agreed to spend his own money to bring the film from the US by special courier. Gulkin, managing director of Siam Canadian Co Ltd which exports frozen seafood from Thailand, said: "The main reason that I did this is that I'm a Canadian and Hunt Hoe [the director] is also a Canadian citizen. It's an unfortunate situation, a kind of bad luck and if I could help in any way, it is great."

Courtesy of Gulkin, film buffs will be able to watch two special shows of "Seducing Maarya" at 7.30pm tomorrow and at 8.30pm on Thursday at the United Artists Theatre at the Emporium, in addition to the show at UA Rama III at 8.50pm on Saturday, following the original film schedule."

"...If they institute a prize for die-hard movie goers, Mr. Gulkin certainly would be one of the favourite contenders.

"...The main reason is the good reputation enjoyed by this movie...I want a Canadian movie win an award here in the Bangkok Film Festival. But no matter what happens, it would be a shame if the Thai people couldn't see it..."(James Gulkin)

"...If you happen to know Mr Gulkin, managing director of Siam-Canadian Food Co, Ltd., give him a big round of applause for his fervent effort and generosity."

Return to Seducing Maarya
or
Return to HomePage